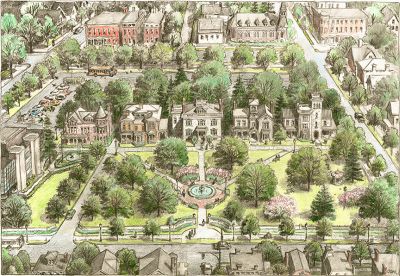 Reading that the Landmarks Society of Greater Utica is purchasing Rutger Park brought a sense of relief, but mixed with concern. It was a relief to know that an important piece of Utica's history and architectural heritage would be preserved.

Yet, David Oster's conceptual drawing of a renovated Rutger Park, above, gives a sense that honoring our past could be a key to our future. People travel thousands of miles to experience an ambiance -- a sense of place -- a mixture of history and beauty. We have that here, but too often take it for granted and allow it to erode. An editorial over the weekend by David Mittel, Jr., of Providence suggests as much:

... Utica is a city God has blessed. It lies on the Mohawk River and... it was built by the Erie Canal. . . . The Erie Canal still runs through Utica . . .But the beauty of the canal cannot be overstated, and it seems to me that better exploiting it could help revive Utica and all the other cities and towns along it.

Utica’s architecture is dominated by the Italianate style dating to the 1860s. Seeing the city for the first time, a young couple might easily say, “Here we will stop and raise a family.” . . .

... in France, there are cities in the Loire Valley about as far from Paris as Utica is from New York that thrive on their beauty alone. At a glance, the Mohawk Valley has every advantage of the Loire. Somehow, the beauty, the housing stock, the Internet, leadership and a bit of luck ought to be able to bring back Utica and the many cities like it.

Greater Utica has a good thing in its natural and man-made environment, and needs to resist those things that threaten its quality -- such as NYRI, the North South Arterial proposals, and decay.

A good thing for this particular project is that the Landmarks Society, rather than politicians, will be in charge. Government is notoriously inept at creating anything of quality. It certainly won't be easy to make the restorations a success, and it will get increasingly harder for this and similar projects until the local economy is turned around and the public is better able to make the necessary contributions.

Nevertheless, time is of the essence. Something needs to be done, now, before the losses are unrecoverable.

Thank you, Landmarks Society, for taking on this project. . . and Good Luck.
Posted by Strikeslip at 8:20 AM

Well stated Strike! I concur one hundred percent. There is so much to be saved in the city, and all that seems to be done is a lot of complaining, and selfish pandering to special political interests, and no action.

There has to be a solutions somewhere to save a beautiful city and make it a proud and shining place to live again.

Our history alone, makes the area a gem along the Mohawk, and a place to be polished up and promoted for tourism and commerce.