Chips to Screens: Can NYS Pull it Off?

Right away the County announced it would pursue this. (Bravo! "Nothing ventured nothing gained" as they say.) Now, per yesterday's Times Union: New York state is pursuing Foxconn for Utica.

Excellent. When it is state to state competition (which is what we have here), it is too big a deal for O.C. to pursue on its own.

Can NYS pull it off?


Posted by Strikeslip at 10:39 AM 7 comments: Links to this post

From Chips to Screens?

From the Times Union Blog: Foxconn Fab $7B Opportunity for NY


Right now it appears that Pennsylvania has the edge....

However, New York state would also appear to be a viable candidate, having just lost a tenant for a $600 million computer chip factory it was planning to build outside of Utica that already has state funding secured. Plans for the factory could easily be changed to make display screens and would help ease the pain of losing the tenant, analog chip maker ams AG of Austria...

If this idea is plausible to folks in Albany it should be plausible to us here. I think Utica would be happy with this.  This blogger certainly would be. And the number of jobs seems to eclipse anything suggested to date. THIS one may really be transformative if landed. But it sounds like people must act fast.

Are EDGE and ESD up to the task?

Have local officials burned their bridges with the people in the best position to help the area succeed?  Is there forgiveness on both sides?
Posted by Strikeslip at 8:41 PM 7 comments: Links to this post

Those Who Presume to be Dictators . . .

Yesterday afternoon I attended the Mohawk Valley Health System's public information session on the new downtown hospital.  If MVHS can be personified, Mr. Perra's presentation came across as "It's all about me."  MVHS gave its criteria to Mohawk Valley EDGE which developed a list of potential sites and, at this point, public input is only wanted on issues such as "will there be a prayer space in the hospital?" 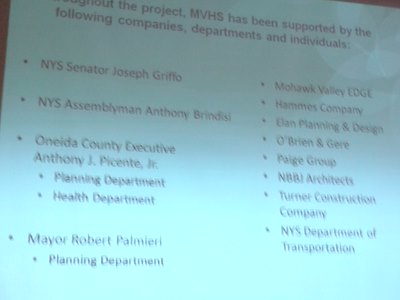 OF COURSE. The hospital is looking out for itself. But who looked out for the public's interest in site selection?

The slide at the left from the presentation tells us who was responsible -- but the answer to the question is "no one."

One visibly irate observer (per the OD photo it was Mr. Critelli, but the OD never printed his question)  stood up and asked the obvious question on most people's minds "Who in the city approved this site?" Mayor Palmieri got up and took responsibility.

Mayor Palmieri and, indeed, all the officials and agencies named at left have assumed powers they simply do not have.

Utica has a duly enacted Master Plan that calls for a mixed-use walkable neighborhood where MVHS wants to put the Hospital.  The Master Plan is consistent with the "Gateway Historic District" legislation passed below in 2005, a zoning ordinance, that defines the forms of construction permitted on the site.  These documents represent the Will of the People and describe the public's interest. From all that has been revealed about the project thus far, the proposed hospital complies with neither. 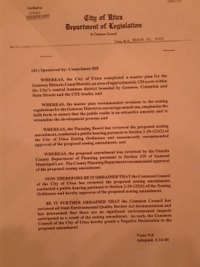 Nor do they have the authority to close and sell the blocks of city streets that will be occupied by the hospital.

Nor do they have the authority to offer for sale the properties of the businesses who already occupy the site -- businesses which pay city, county, school and sales taxes and which employ people.

Nor do they have the authority to approve of a particular site from those that are available without the studies and public involvement required by the State Environmental Quality Review Act to ensure that the site selected minimizes environmental impacts to the maximum extent practicable.

We either live under the rule of law or we live in a dictatorship.

Shame on them!
Posted by Strikeslip at 11:22 AM 5 comments: Links to this post

Another Nail in Upstate's Coffin . . .


"Indian Point's two active nuclear power plants will close by April 2021 under an agreement confirmed Friday by Westchester County Executive Rob Astorino, who said the 'secret deal' was 'a complete surprise to us' and 'potentially catastrophic.'"


While Mr. Astorino worries about higher property taxes and electric rates for Westchester County residents, it's going to be bad for us in Utica as well.

How much good will our new $35 million electric line and substation project do to attract a tenant to Marcy Nano if that electricity becomes more expensive because Upstate hydropower will be sent Downstate to make up for the loss of Indian Point?

Thank you Gov. Cuomo for putting another nail in Upstate's coffin.

On Fault Lines, we've been keeping our eye on Indian Point for over 10 years. Check out Indian Point: Our Problem, Too from 2011 with links to 5 earlier posts.


Posted by Strikeslip at 5:15 PM No comments: Links to this post

Posted by Strikeslip at 4:39 PM 5 comments: Links to this post

HAPPY NEW YEAR and hat tip to the New Hartford Online Blog for this story!

There will be a public hearing by the Oneida County Industrial Development Agency on January 19, 2017 at 10AM in Butler Hall to consider whether OCIDA should give assistance to "Hartford Luxury Apartments LLC" (a) in acquiring approximately 14.5 acres of land at 161-169 Clinton St in the Town of New Hartford, (b) in constructing 4 condominiums containing 21 units and 4 apartment buildings containing 104 units, together with various other improvements and (c) in acquisition and installation of equipment in the improvements . . .

"all for the purpose of providing luxury apartments for lease to attract employers and to enhance economic development in the region . . ."

Have you ever heard of such B.S.?

More power to the folks who want to build something new, but does it have to be with taxpayer assistance?  Instead of sustainable jobs OCIDA is giving us housing --- competing with plenty of housing already under construction in anticipation of "nano" -- which does not seem to be coming -- and existing housing coming on the market due to people packing up and leaving the region to improve their personal finances. OCIDA will ensure that the LLC folks will get all sorts of breaks from costs that average Oneida County residents will still be expected to bear when acquiring or improving their own properties -- properties that will become less valuable because of competition from this new, partially taxpayer-financed project.  If these breaks are so needed for economic development, why not just give them to everyone and eliminate the OCIDA and all the paperwork involved? It is better to spend money on bricks and mortar than complicated agreements.


Posted by Strikeslip at 4:29 PM 3 comments: Links to this post