It was just a month ago when people opening their water bills were greeted by a 15.2% increase in their sewer rates. Not a word about this was mentioned in the Utica news. 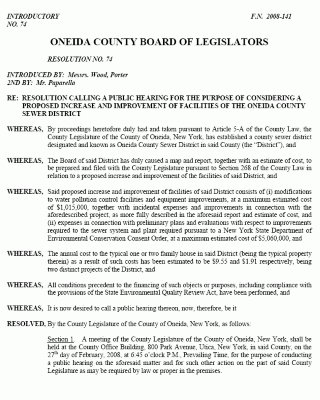 Another increase is going to get passed down to the sewer USERS to pay for ONEIDA COUNTY'S violation of the law.

The USERS however are paying to have their sewage properly disposed of -- and they did not get what they paid for .

The USERS did not benefit from the violations of the law.

However, the COUNTY and the TOWNS (primarily New Hartford) profited handsomely from their improper sewer connections. They looked the other way because COUNTY AND TOWN OFFICIALS WANTED THE INCREASE IN TAX BASE from all the new developments that they were approving. . . . Never mind that the sewage was not being properly handled.

When the law caught up to them, they decided to pass the cost down to you, the USERS (half of whom live in Utica). So if you are a big water user because you use it in your business, or you have a large family, or you just like to take a lot of baths, you get to pay a larger percentage of the County's punishment.

This is wrong. The County and the Towns need to pay for this out of their own proceeds -- from their expanded tax bases -- and not dump this on the sewer Users.

Maybe then they will think twice before trashing the environment for the sake of "economic growth."
Posted by Strikeslip at 6:59 AM

How come when Lowes tried to open the sewer was big Issue with the DEC but when the Hartford wants to relocate to the same area it wasn't an issue? I would think the load put on a sewer system would be greater in an office park then a retail park?

Waterboy -- You would think correctly!

Speculation: Lowes came on the scene before the consent order was finalized. At that point in time, there was a vacuum in the DEC regional leadership due to the change in administrations, so the career civil servants would have been making the decisions when Lowes was an issue. Once the change in DEC Regional leadership was complete, the Consent Order was quickly finalized and the DEC gave a credit to New Hartford for the alleged removal of storm water from a part of its system done **before the consent order was even signed.**

It's not what you know, or what is fair -- but who you know in the right places that gets things done.