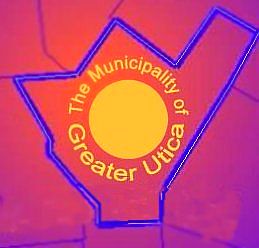 The OD's View:  Parochial walls must come down.


The smoldering tiff between the Utica Common Council and a committee that recommends federal funding for nonprofits once again puts an accent on the embarrassing parochialism that can threaten growth in our community. . .

In this case, the flames are being fanned by the age-old city residency argument. . .

Hopefully the people that might be considering setting up a multi-billion dollar computer chip operation here aren’t watching all this. It’s theater of the absurd. . . .

To believe that someone from outside one set of lines doesn’t care about what happens across those lines is just plain silly.

What's silly is OD's claim that city officials believe that people from outside don't care about what happens in the city.  Untrue! The city has long recognized that "outsiders" care and invited them in to help -- e.g. the Utica Master Plan steering committee which had several non-residents among its members.

What is absurd is the OD's position that residency requirements are not relevant.  If that is the case, let's get rid of the residency requirement for mayor . . . or how about New Hartford town supervisor?  . . . . Yes, those suggestions are ridiculous.  Even though someone in Utica "cares" about what happens in New Hartford (because NH's decisions have caused increases to Utica's tax, sewer and water rates) NH would not allow a Utican to run for town supervisor. The laws contemplate that municipal officials have "skin in the game" by being resident within the municipality.  If Utica is forming a committee to distribute public funds to city projects, it is Utica's prerogative to limit participants to residents who will live with the consequences of their decisions.  "Caring" is not enough.

It is interesting that it is always Utica that is on the receiving end the OD's cries of  "parochialism."  The "parochial walls" always operate one way,  favoring suburban interests.

If the OD is seriously interested in eliminating "parochialism," it would advocate ridding ourselves of multiple municipal boundaries that allow suburban jurisdictions to accumulate wealth at the expense of city residents.

Somehow I do not think the OD is ready for this.  Until the OD stands for a true merger of city and suburban governments, it should be ignored.
Posted by Strikeslip at 8:24 AM

If the Great Recession didn't cause this to happen ( ie merging) then nothing will. Why would you want to act as one large area if you are a politican? Your small kingdom would be no more.
Will the chip plants bring in world class thinkers too who will suggest such a thing? I certainly hope so.

We should not take the OD all that seriously. They have been writing "let's end parochialism for decades now. It just sounds good and means little to nothing. And, Silence Dogood should not get his or her hopes up. If and when a chip plant comes in, the owners will be beholden to those who grant them all that they will be given by government. They will not be activists either as companies or individuals. Those days are gone given the increased role of government in the grant and tax break business. In the old days, a GE or Bendix paid full taxes and exerted great influence over local government. That is not the case now.

I find it odd that Kris Worrell over at the Observer Dispatch does not do any objective reporting of the Town of New Hartford and their shenanigans, especially, the NH Business Park and a supposedly signed Pilot Allocation Agreement. It is long overdue that the current Town Officials need to be voted out of office and allow for someone with new, fresh ideas. Is this too much to ask for?

There is no real, comprehensive reporting of government on any level. It is not just a New Hartford bias. The OD does not even employ an actual investigative reporter. It is up to the citizen to be his own public watchdog and most are not willing to assume that role.