Was Something Other Than Planning Going On? . . .

After almost three years and $355,000 spent, the town might walk away from a study outlining growth patterns for the southern portion of New Hartford. . . .
. . . But at least three members have already come out against its key proposal: a 5-acre average lot size.

Former Planning Board Chairman Jerome Donovan, who served through the end of 2009, slammed the Town Board members for backing away from “a legitimate planning study with sound recommendations.”

“To do nothing would be an example of government ineptness and a monumental waste of town and county tax dollars,” he said. Oneida County paid $150,000 of the cost of the study, Donovan said.

Really? If it is apparent that the study is not "legitimate" and apparent that the recommendations are not "sound," then, yes, we do have "a monumental waste of town and county tax dollars" ... and the Town Board should have nothing to do with it. (How did the County get involved? Is the County contributing to Utica's Master Plan? Did it contribute to Whitestown's plan? But I digress . . .)

Whether or not the study is "legitimate" can be a matter of opinion, but if the town's population
feels it was left out of the planning process (i.e., not merely invited to chime agreement with the consultants and/or their handlers) then the study may be considered not "legitimate."

"Legitimacy" can also be a matter of "truth in labeling." The "Generic Environmental Impact Statement" looked more like a proposed land use plan than a determination of environmental impacts. Usually a plan comes first, then an impact statement -- not both at the same time.

The purpose of the GEIS is to develop a growth management design plan consistent with the conceptual plan of the 2007 Comprehensive Plan, to conduct an environmental review of the implementation of the Design Plan for the southern area, and to identify the infrastructure changes that are necessary to implement the Design Plan. [§1.3]

This begs the question: Where is the "Design Plan" for the southern area? Reading the document (and there not being a separate document labeled "Design Plan") makes it clear that what is labeled the GEIS is the Design Plan. But with two different concepts (a plan vs an impact statement) combined in one document, it is confusing for the public when they are invited to comment. Are they supposed to comment on environmental impacts? Or on the elements of the design?

One of the "workshops" held for the public to identify environmental impacts left the distinct impression that the consultants were really looking for statements that could be cited to support parts of a plan. They reacted favorably when someone mentioned wanting a "trail system" -- which would be an element of a design plan, not an environmental impact. However, they reacted unfavorably when asked what the proposed project that would create the impacts might be. When asked if the project was a "design plan" they seemed to do everything to avoid answering the question. Here's more:

The purpose of the GEIS is to develop a plan for the Study Area to concentrate development in the hamlets, thus helping the community identify strategies it can use to preserve the character of the community, prevent sprawl and to determine the impacts of the Town’s decisions about future land uses in the Study Area. [§2.1]

This begs the question: Who decided that development was to be concentrated in the hamlets? Was it the consultant? Or was it some town official who thought it might be a good idea? I don't necessarily disagree with this idea, but it is disingenuous to go through a public meeting process to give an impression that this idea came from or was supported by the public. But the process did seem disingenuous. . . .

The Stormwater Group has determined that the best way to manage future stormwater impacts is to limit development in the upland areas to large lot sizes with minimal building and surface coverages. [2.4.4]

The Stormwater Group never made a determination of the "best way" to manage anything. The 5-acre requirement was another one of those ideas that was pre-conceived, presented, and reacted-to by the group, with the reaction somehow morphing in the GEIS into a determination that this was the "best way" without the group being offered alternatives.

As far as the "sound" recommendations mentioned by the former Planning Board Chairman, let's get back to the OD article and focus on that 5-acre proposal since that is what has generated the most opposition and is an example of why this plan must be rejected.

. . . many residents had said they wanted the town to solve the stormwater runoff problems that were plaguing their neighborhoods. The 5-acre plan would prevent the problem from getting worse, Donovan said.

How so? You don't have to be an environmental scientist to know that five acre lawns will generate a lot more runoff if they replace 5 acres of woodland.

. . .many residents said they wanted to preserve the rural character of the southern part of the town. Residents were worried that large subdivisions could burden town roads and reduce open space in New Hartford.

Donovan points to that finding as a key impetus for the 5-acre plan.

But zoning an area as agricultural would do a much better job of preserving the town's rural character than a 5-acre rule. Manicured lawns don't look like rural fields.

If subdivisions are limited to 5 acre lots, isn't that what Wikipedia would call "exclusionary zoning?" . . .i.e., "measures that appear to impose unnecessary or unjustifiable costs or requirements facially or by execution excluding various groups of ‘undesirables.'"

Is that what is intended here? If the 5-acre requirement does not guarantee runoff control or preservation of "rural" character, what does it guarantee?

What else is in the plan? Compare the Chadwicks Hamlet "Design Concept" [Fig 2.5-11] with what is on the ground now (via Google Earth) . . . 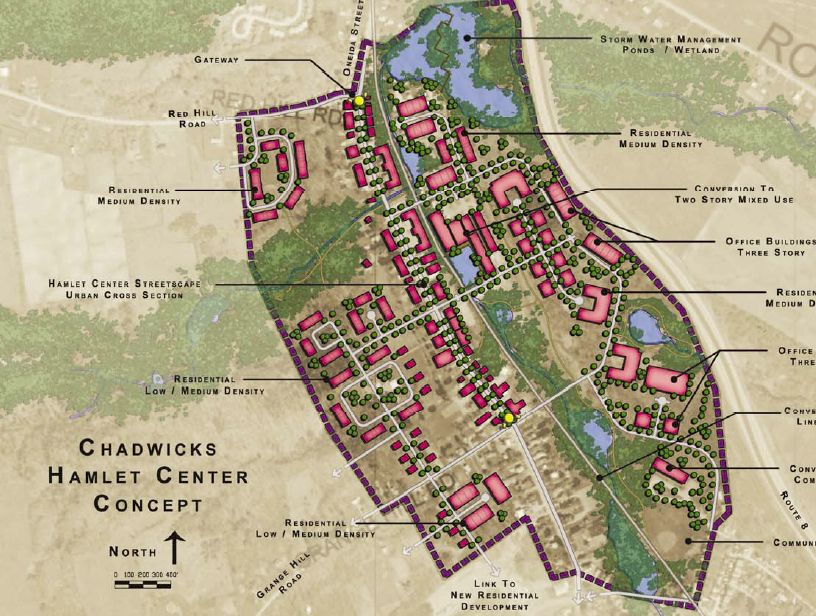 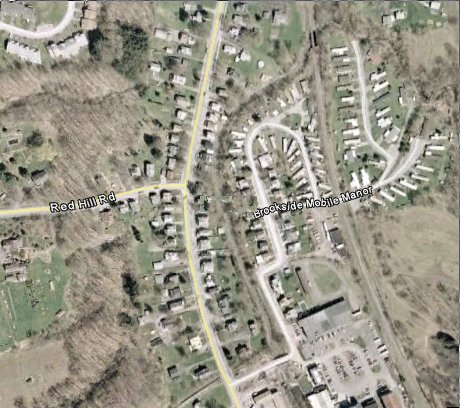 The Brookside Mobile Manor will be replaced by "Storm Water Management Ponds/Wetlands." Is this the only possible place for the pond/wetland? Is it really necessary to place a water feature where people are living? Why would the pond/wetland be needed if nearby development is properly controlled? Are the people living there asking to be moved? Or is their presence "undesirable?" The GEIS discusses the situation and how the Town should have a plan for the displaced residents . . . but will the plan be like the non-existent mitigation plans that the Town elsewhere collected Fees In Lieu of Mitigation money for?

To be fair (and maybe I'm not being fair) there are some good concepts in the GEIS, but the way it was developed and the way it unfolded raises the question:

Is this the vision of the Town's residents, or only that of a selected few that controlled the process?

The Town Board needs to answer that question before going any further with it.
Posted by Strikeslip at 2:00 PM

re: The Brookside Mobile Manor will be replaced by "Storm Water Management Ponds/Wetlands."

Interesting you point out this comment. It was this comment that caused (in part) a firestorm. Planning Board Chairman, Jerome Donovan was adamant in using eminent domain to remove these town residents from their mobile homes. Why?

It was not the wetlands issue. Jerome Donovan felt these people were undesirables. Why? Simply because they live in mobile homes?

Jerome Donovan was biased from the very start. His colors show loud and lear in the report and so too, does his inability to take on a leadership role in the town of New Hartford.

The 5 acre lot is exclusionary and designed for a certain "class" of homeowner.

As a former resident of the New Hartford, I find it difficult to understand why the town must continue to grow and construct additional infrastructure when underutilized streets, sewer, power, water and phone infrastructure are available in adjacent city of Utica.

Well, it isn't really that hard to understand, lack of regional planning and housing developers/speculators self serving goal of relocating all of the citizens of Utica who wish to remain in the area but not live in the city.

It is insane and a shame to let the city and its existing infrastructure go to ruin.

The sooner we (NH Residents) can get past the Roger Cleveland influenced perspective of managing New Hartford's growth the better. We might also would be better served to get rid of Peter Smith and Co. while we're at it. Not that I'm in favor of study after study, a clean slate is in order.

Since when does New Hartford give a damn about Utica? Maybe New Hartford should institute income requirements for those who wish to relocate to the town/village. That way, N.H. snobs won't have to look down their noses at too many more "undesirables".

Could the real reason be for the 5 acre lots was because of the type of people who would be able to afford them?

Perhaps, someone's Agenda was to build a place that only served the social elite?

We certainly do have class systems in the Town of New Hartford.

My point exactly. Of course, N.H. residents won't mind when folks from Utica have to help pay for the sewer fiasco that New Hartford created. Maybe I'll move to "New Haatfud" & take advantage of my hard earned money having to go to the town/village to cure the mess that they got themselves into with their lousy planning. Perhaps New Hartford should cecede from Oneida County & the sewer district & pay for their own irresponsibility.

So, in New Hartford the pecking order from most to least importance, apparently is:

Well, what's the alternative? Run away development? more environmental degradation? Storm water issues? increase in taxes to apyfor the new roads and other infrastructure? It maybe anecdotal, but I have noticed alot of homes for sale in the vicinity of the village of New Hartford. Very unusual for this time of year. One thing for sure,there is not a housing shortage in New Hartford.

The alternative is a correctly sequenced planning process that is focused on figuring out what the residents want... not what those controlling the process want.

First, stop calling the document a "GEIS." Do a Land Use Plan first, then figure out in an EIS what the impacts are and how to mitigate them.

Allegedly for the GEIS surveys were sent out to find out what the people "wanted," but not everyone got them, and everyone knows that questions are skewed to generate a particular answer.

The process in Whitestown and going on in Utica now is much more transparent. In Utica there is a rather large steering committee of residents and community leaders to keep things organized. Meetings have been held in each neighborhood to find out what the people want. A draft is being put together. More public meetings and more public input will be solicited on the draft. My understanding is that it was a similar process in Whitestown.