According to the Observer-Dispatch: "Study reveals how downtown hospital site was chosen"

Five of the 12 sites are golf courses; three others include current or former hospital sites; one is a business park; one is owned by a business; one sounds like vacant land; and, finally, one is Downtown.

Supposedly "parcels 50 acres and larger"  were identified to host the facility, but the Downtown Site is neither 50 acres, nor is it a "parcel,"  but, rather, it is about 25 acres consisting of about 90 parcels, occupied by about 40 business and other entities, plus blocks of city streets. The dis-similarity of the Downtown Site to all the others on the list begs the question: "Why was Downtown even looked at?"

It's clear from the FOILed e-mails of county officials that the site selection "process" involved designating sites that could be eliminated (straw-men to be knocked down) in order to steer the MVHS Board to choose the Downtown Site that was preferred by local economic development and various elected officials. "Elan" was the consultant brought on board by EDGE to perform this task.   Per the 2/3/2015 e-mail of EDGE President Steven DiMeo to Anthony Brindisi . . .


"My whole thought process in bringing Elan on board is to make sure that we guide siting decision in favor of downtown."

This Blog previously drew the conclusion that no criteria were included in the siting process to protect the public's interest.  The "Summary Memo" of the selection process included in the Hospital's Draft Environmental Impact Statement reinforces this conclusion.

The Draft Environmental Impact Statement's failure to include the actual Site Selection Study (as opposed to a "Summary Memo") and to explain how the Downtown Site even was put on the list leads to the conclusion that the site selection "process" was merely a sham - window dressing -  to hide from the Hospital Board, the Public, and, now, the involved State Agencies that putting the hospital Downtown was merely the arbitrary and personal choice of certain local officials.

Posted by Strikeslip at 11:59 AM 3 comments: Links to this post

In case you missed the 4-way debate for NY Governor (Cuomo absented himself) held by the League of Women Voters, here is a link.  The awfully-moderated earlier debate between Cuomo and Molinaro may be painfully watched here. (It only demonstrates Cuomo's big mouth and lack of self control).

We know that Cuomo's policies have produced zilch results economically for Upstate NY, in spite of spending unprecedented amounts ($Billions) of tax dollars on buildings for industries, airports, and public infrastructure. How many times does the Communist approach to economic development (public ownership of the means of production) have to be tried before it is relegated to the dust-bin of history?

Mr. Molinaro, while more moderate than Mr. Cuomo, is unconvincing that he would bring needed changes to New York. On social issues he expresses more concern about maintaining abortion rights than he does about protecting 2nd Amendment rights (his running mate is pro-SAFE Act).  He may wear the Republican label but acts like a "Lite Democrat."

Most telling, and concerning, was Mr. Molinaro's side-stepping any endorsement of President Trump's economic policies, even after at least 3 challenges by Mr. Cuomo to do so.  Does Molinaro not see the significant improvement in the Nation's business climate brought by Trump's tax changes and regulation reductions?  The economic numbers are the best the Nation has seen in Decades! Why would the State's GOP pick for Governor not embrace the President's policies that have worked so well, particularly in "flyover" parts of the country that are similar to Upstate NY? Why would the GOP pick for Governor not show how NY could profit from these policies?  Is he OK with the Nation leaving NY behind?

Libertarian Larry Sharpe, with the "less government" message, offers the best hope for New York to advance economically, especially in the Trump era.  He is the ONLY candidate that recognizes that turning New York around will require a "culture change" toward less government in Albany.  He has demonstrated his willingness to take on that challenge given the map of all the places in New York State that he has visited during his campaign. I don't think we have ever seen a candidate for governor work this hard!

Mr. Sharpe is clearly in this race to win -- and if he does, New York will become a much better place to live by shrinking the size of government and its control over our lives.

But if you vote for Mr. Sharpe, you will win Something even if he comes in second or third.

In New York, a Party's placement on a ballot depends upon the number of votes cast for the Party in the governor's race.  If Sharpe places second, the Libertarian Party will take over the second line on the Ballot, sending a strong message to Republican leadership that it needs to change in a "less government" direction.

There have been a LOT of funny (ha ha) radio ads asking voters to vote for Mr. Molinaro on the Conservate Party Line "to show support for President Trump" - which makes them "funny" in a "weird" sense since Mr. Molinaro does not support President Trump.  The ads show Conservative Party desperation to hold on to that 3rd Ballot line -- which is too often squandered on candidates that are not really conservative. If Sharpe places 3rd, which he can do very easily, the Libertarian Party will take over the 3rd line, telling the Conservative Party that it needs to move in a "less government" direction.

Culture change in Albany will not come easily.  A vote for Sharpe gives the voter 3 chances to start that culture change.

Posted by Strikeslip at 2:58 PM No comments: Links to this post

Tuesday's congressional election is bigger than Tenney v Brindisi and Gillibrand vs Farley.  It is about who will control the Congress.  Here's your real ballot (from a Facebook meme): 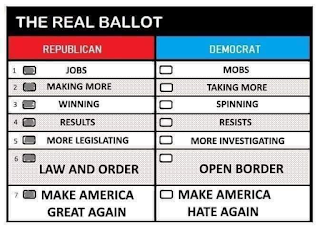 It is also directing your own life vs government running your life, and taking care of Americans vs taking care of the world.
The Democrats have moved to the radical left.  "Medicare for All" means taking Medicare from Seniors who have paid into it for a lifetime and using it to pay for medicare for everyone else. It won't be healthcare between you and your doctor -- it will be between you and your government. Proposed Democrat "middle class tax cuts" (see Kamala Harris) will be "Welfare for All" because they are designed to make the middle class as dependent upon government checks as the poor. Democrats want to control you and everything about you, including what you think, say or do.  They will use every means necessary to take power and lord it over you -- including turning government agencies against those with differing ideas, spying on phone conversations, invading personal computers, harassing individuals and their families, filing spurious or false charges and lawsuits, and character assassination. Once they have power, they will not cede to contrary wishes of the voters because they will populate the government with civil servants that will be obedient only to them. These are things that have already been done, or will be done.

The election is no longer about who will represent you, but  in what direction do you want the country to move.