Followup to Dazzling and Disgusting . . .

Here's a followup to the Downtown: Dazzling and Disgusting post earlier this year . . .

The rain forest . . . I mean rain garden in front of my barber's shop is still disgusting.  It contains junk, and is overgrown with weeds, one over five feet tall. 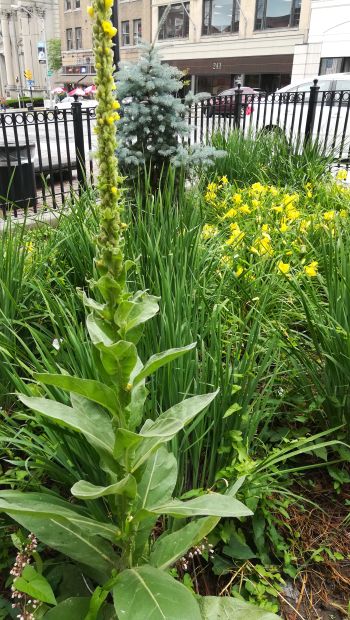 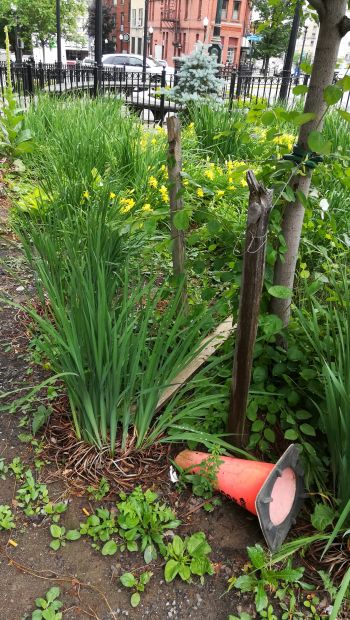 Maybe it will get cleaned up for the Boilermaker.
Posted by Strikeslip at 8:54 AM 1 comment: Links to this post

"Project Labor Agreement (PLA)."  I had never heard the term before until a friend called yesterday to relate that the term had been used by some of the Union demonstrators in favor of the Downtown Hospital Project the other night.  No sooner did I hang up the phone when I heard the term used again during an interview with Tommy Carcone, President of the Utica Fire Union on WUTQ.

WikiPedia defines a PLA as


"a pre-hire collective bargaining agreement with one or more labor organizations that establishes the terms and conditions of employment for a specific construction project. Before any workers are hired on the project, construction unions have bargaining rights to determine the wage rates and benefits of all employees working on the particular project and to agree to the provisions of the agreement. The terms of the agreement apply to all contractors and subcontractors who successfully bid on the project, and supersedes any existing collective bargaining agreements. . . " (superscripts omitted)

PLAs can be good things, ensuring that workers on taxpayer-funded projects have protections against being taken advantage of (pay, working conditions, hours, safety, etc.,etc.).  However, the website The Truth About Project Labor Agreements calls them

How does this relate to the Downtown Hospital proposal? It can be presumed that since taxpayer dollars are involved and since NYS favors the use of PLAs (24 states apparently take the opposite view), there would be a PLA no matter where the hospital is built. So why was the term was used by demonstrators?  Is there a PLA in existence for the proposal? If so, who signed it and when, and what are its terms? Is there a PLA that requires the hospital to be built Downtown -- or one that is conditioned upon the hospital being built Downtown?

At this point it is unclear why the Union demonstrators have chosen sides in the hospital location debate, or whether it is related to a PLA or not, but maybe someone out there can clarify with a comment.

Mr. Carcone's interview, however, is another story -- a troubling one. Beginning at around 13:00 he talks about the Utica Ambulance service being a revenue source for the city of Utica and having a Certificate of Need to serve Utica (exclusively?). He argues that this somehow will make up for the loss of tax revenue that will come into the city due to the hospital being tax exempt.  [Of course, that loss of tax revenue to Utica would be totally avoided if the hospital were built at St. Luke's].

The Utica Ambulance Service has already gone into competition against private ambulance companies. If my memory serves me correctly, that was done supposedly to increase revenues into the City of Utica (by tapping deep-pocket insurers). But if the costs to customers are going into balancing the city budget in addition to the supply of the actual service, CUSTOMERS ARE PAYING MORE FOR THE AMBULANCE SERVICE THAN IT IS WORTH IN THE OPEN MARKET. In addition, the service will be subject to the same abuses that we see often in local government as compared to private businesses, further increasing costs. See "Ambulance Chasing" from March 2011. I do not think that the Utica taxpayers have ever been given a breakdown of the actual cost of their ambulance service.

Mr. Carcone talked about an agreement with Utica College and proposed that the hospital should buy an ambulance for the UFD. (Why should our regional hospital buy an ambulance for Utica?) Maybe I am wrong but it sounded like putting the hospital in Utica would somehow be used to get suburban residents to contribute to Utica. Could patients some day be faced with a Utica law that says "All persons travelling to hospitals in Utica by ambulance must be transported by the Utica Fire Dept?" That seemed to be what this guy was implying but maybe I misunderstood him. Yet we've seen how the rules and laws can be manipulated both in regard to the ambulance service and other things.   This would increase benefits to the Utica Firefighter's Union, put the squeeze on private businesses, increase local insurance rates, and do nothing to improve healthcare.

Mr. Carcone also discussed negotiating "Project Labor Agreements" after the project is built.  My understanding is that hospital workers already have their bargaining representatives.  What is his interest in this?  Is he thinking that Utica's municipal workers' unions will somehow get involved?

It sounds like putting the hospital in Utica is going to subject its operations to Utica special-interest politics.

This is probably the best reason for KEEPING THE NEW HOSPITAL OUT OF UTICA. Who thinks that forcing the Hospital to deal with Utica politics will benefit their healthcare?

Posted by Strikeslip at 7:22 AM 3 comments: Links to this post